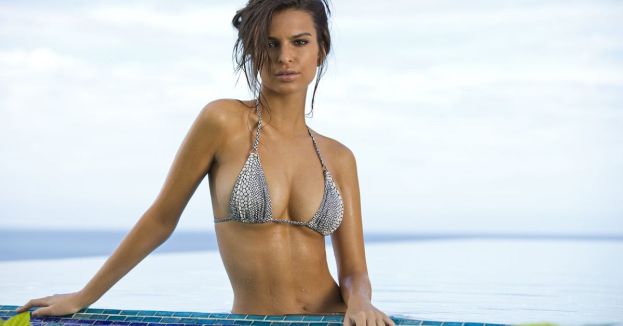 Sports Illustrated supermodel Emily Ratajkowski stated that she doesn't believe in straight people as she recently filed for divorce from her husband.

Ratajkowski is a 31-year-old model for the Sports Illustrated media brand. She recently gave an interview with Harper's Bazaar in which she was asked about a TikTok video that she recently uploaded, which seemed to indicate that she identifies as bisexual. The interviewer asked Ratajkowski about this, and that is when the supermodel stated that she doesn't believe in straight people.

She stated that she feels that sexuality is on a sliding scale. She doesn't feel anyone is genuinely 100% straight or 100% gay. She thinks that all people have a range of their sexuality.

The model put out a TikTok video in which she talks about a green couch she owns. She also says that owning a green couch marks someone as bi-sexual. Thus, some viewers conclude that the supermodel is outing herself as a bi-sexual.

Page Six noted that the supermodel filed a divorce from her husband in September. The two were married for four years and had a one-year-old son together.

When interviewing with Harper, Ratajkowski alleges that her husband cheated on her and that she feels mixed emotions about being single now. She says there is a lot of confusion, anger, joy, relief, and every other emotion mixed. She isn't quite sure how to feel about some of the things that have happened in the last few years, but she knows that it is a new chapter of her life, and she is interested in seeing what will happen next.

She didn't want to dive too deeply into the nature of her divorce, but Ratajkowski said she is dating again. She said she has gone on some dates but also wanted to clarify that she is not using dating apps to meet these dates. She did leave open the possibility that she might use dating apps to find mates in the future, though. She said, "Just give it some time."

Interestingly, Ratajkowski did not clarify if she is going on dates with men, women, or both, and the interviewer for Harper did not press the issue. There are certain things that Ratajkowski still wants to keep private about her personal life, even in a wide-ranging interview.