That's Your Backup? Hochul Gets Some Questionable Support In Desperate Effort To Win Election 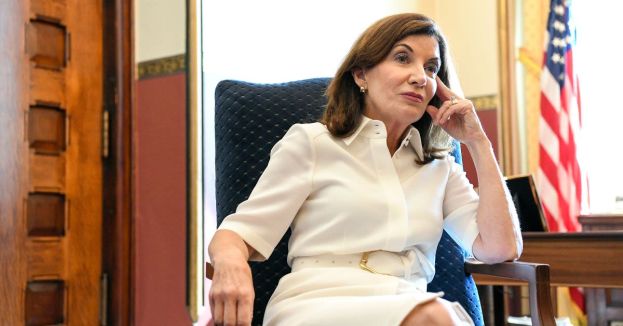 The New York Times reported that Harris was asked to be a surrogate for Hochul in the state. Even though Harris is not seen as a popular choice for most Democrats across the country, her connection to the Biden Administration and her lack of popularity have put Harris on the back burner for most candidates. Many Democrats don't want her anywhere near their campaign as the closing days of the election are upon us.

National Democrats panic about Hochul's re-election chances as they see a surging Republican, Lee Zeldin, making up a lot of ground on their candidate. This is occurring in the solidly blue state of New York (at least on the Presidential level). That may spell some terrible news for Democrats in other parts of the country that are far more competitive. One has to wonder what Democrats plan to do to fend off challengers in areas that are more neutral or even purple in their political composition.

Last Monday, one poll put Lee Zeldin squarely ahead of Hochul with a lead of 48.4 percent to 47.6 percent for Hochul. This seems to have set off alarm bells for Democrats, who are now scrambling to find any surrogates they can get to New York to push for Hochul to be re-elected.

The fact that they have decided to go with Harris and Clinton is profoundly puzzling to many observers. Hillary Clinton does have a connection to the state and has served as a Senator from New York for some time. However, that still doesn't explain why Democrats would send a less than popular Vice-President to the area.

The Democratic Governors Association has also put money into the race. Initially, they were not going to because they considered the seat safe and thought it would be okay to try to protect it. However, things have changed dramatically on that front, and it seems that Democrats are now very concerned that they might lose in a place that is considered solidly Democratic for the most part.

With all of this in mind, keeping at least one eye on New York as a potential upset win for Republicans on Election Day will be necessary. Election Day is on November 8th this year.