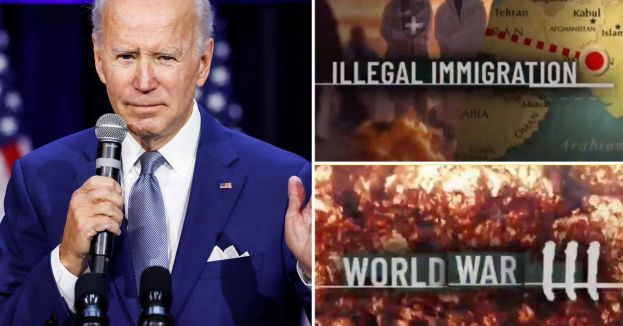 Game 1 of the World Series will see a new attack ad against President Biden.

This ad is set to blast the President over a host of issues. One of the most significant issues it is expected to address is the President's handling (or lack thereof) of the crisis occurring at our southern border.

Citizens for Sanity is the group that paid for this ad, and it appears that their target market is Latino voters. The ad's narrator speaks in a Hispanic accent, and the ad is designed to remind everyone of the failures of this administration to handle the illegal immigration crisis that has swamped the whole country.

Part of the ad copy reads as follows:

"Our cities are a mess. Public services are a nightmare. But instead of helping us, Joe Biden sent $66 billion to Ukraine. Weapons are worth billions more. And now, Joe Biden says his fight in Ukraine could lead to nuclear Armageddon. World War III."

The group frequently puts out ads that get people thinking and talking about all the points they are making. Indeed, many of the ads the group already released this year target progressive politicians and mock them for some stances that they have taken this cycle.

It is a compelling tactic for groups of people who agree that progressive politicians haven't done enough to help them with the real problems that they are facing. While progressives want to complain about abortion rights or rights for tiny minority groups, the whole public suffers from increased crime and inflation.

Citizens for Sanity has run ads during Major League Baseball games, and they are no strangers to coming up with fantastic ad copy that sticks in viewers' minds. They have a knack for hitting people with the right notes to make them stand up and pay attention.

The Philadelphia Inquirer says that Democrats also plan to run ads during the World Series. Their ads intend to speak to voters about Dr. Oz's stance on abortion and paint him as an extremist on that issue. Given that the World Series is between the Houston Astros and the Philadelphia Phillies, the expectation is that many Philadelphia residents will be watching the game.

Both sides are giving it their all as we head into the final stretch before election day. Election day is on Tuesday, November 8, 2022.