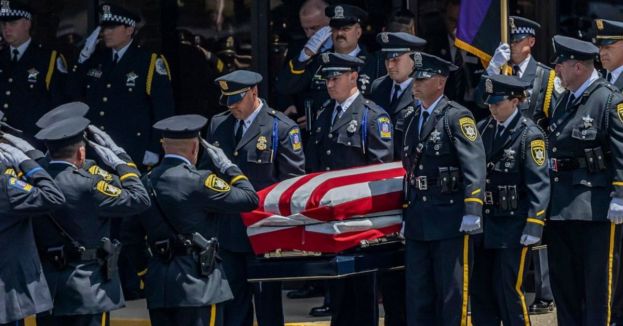 In an era of defunding the Police and disrespect for law enforcement encouraged by politicians and the media, police officers commit suicide in more significant numbers.

Fox News reports a surge in cop suicides in San Antonio, Texas reporting, “A 30-year-old Texas police officer in San Antonio committed suicide in early October”. This suicide marked the fifth suicide in the department by an officer or recently retired officer in the past seven months.

Four of the suicides were active-duty cops, and the fifth had retired two weeks before taking his own life.

Tata Glenn, a therapist, specializing in treating first responders, suggested that politicians and the media demonizing cops in the wake of the death of George Floyd at the hands of police officers caused suicides. Police morale has also plummeted nationwide as a result.

Glenn said, “They have a really big city with a lot of violence, and they have been dealing with the media portrayals of law enforcement folks as demons,” Glenn said. Additionally, they have been cut off from society and engaging in making people happy with ‘coffee with a cop’ and things like that. “All these things have [really] come to a screeching halt between the pandemic and what happened after George Floyd. So, they’re isolated. Their mental health is suffering, the trauma is compounding, and it’s just this perfect storm for what’s happening there.”

The fact that many officers are resigning or taking early retirement, thus decreasing the size of police departments when violent crime is skyrocketing, does not help matters. The culture in which police officers internalize stress until it becomes unbearable is the perfect recipe for a rash of suicides.

Glenn says, “It comes down to the fact that all they see is that suicide is the only option and their brain and depression do this awful thing. It [really] tricks you into believing that people will be better off without you, which, [of course], cannot be further from the truth.”

The solution is obvious, Glenn suggests. “There needs to be a massive, massive effort on recruiting, so we can build back our numbers and increase the morale. But the key is to stop the [demonization of the profession] and to quickly move to get back behind our police officers and to support them.”