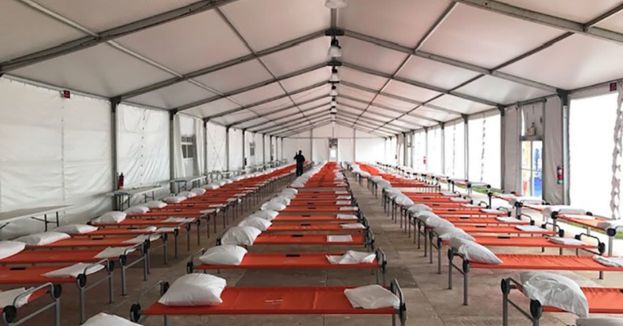 The “first touchpoint for asylum seekers” is what New York Mayor Eric Adams called the climate-controlled tents the city plans to provide shelter for foreign nationals bused from the border by Republican governors.

According to Just the News, Adams indicated the city would provide a litany of services and compared the border-crosser influx to immigrants arriving at Ellis Island over 100 years ago. Adams said, “Like the generations that came to our city before, New York will provide the thousands now coming to our city with the foundation to build a better life.”

New arrivals to the city will be dropped off at tent communities or directed there by the Port Authority. They will be given information regarding their legal rights, healthcare, and safety.

Just the News reported that Deputy Mayor for Public Safety Philip Banks said, “We need to assess and address asylum seekers’ needs as soon as they arrive and connect them with services as quickly as possible. The relief centers will be a crucial piece of our overall response to help these asylum seekers get their necessary assistance.”

As the executive director of the New York Immigration Coalition, Murad Awawdeh is not a fan of Adams’ plan. “While we recognize there is urgency in meeting the very real needs of asylum-seeking families while our shelter system remains over-burdened,” he said, “We believe that any effort to open a temporary relief camp at Orchard Beach is ridiculous and likely to cause more harm than good, especially as the fall turns into winter.

This center raises serious concerns relating to access to transportation, care, and other support that people need to get back on their feet and to fully integrate into our city.

Moreover, we fear that what was meant to be a temporary solution will become an inadequate permanent one, which will lead to long-term negative impacts on the individuals housed there, as well as becoming a stain on New Your City’s reputation as a welcoming city.”

The city’s announcement of the tents shows images of rows of cots for single individuals. Families will have other options.

The Patriot Journal reported that instead of pushing for Biden to secure the border as a solution, Adams is spending millions, demanding city departments cut funding to pay for the shanty towns.