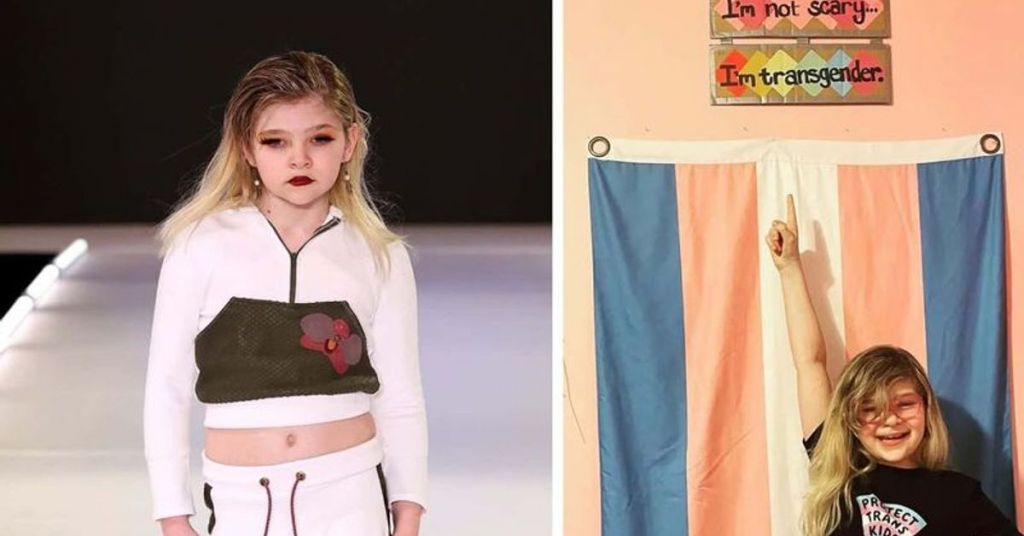 IN what could be the most heinous form of child abuse, a transgender couple claims their child 'came out' at the age of two, and now, they are using him/her to make a statement while parading him/her around fashion shows.

Her parents announced she was born with a "fierce and confident sense of identity." And that self-assurance can be seen on the catwalk, where ten-year-old Noella McMaher has become the world's youngest trans­gender model.

Noella – who fashion insiders explain could make her first million in the next year – first identified as transgender at "two-and-a-half nearing three," according to her biological mother Dee, 35, who now identifies as a "transmasculine male" and notes Noella as an inspiration.

In an exclusive interview with The Mail on Sunday, Dee announced: "My spouse and I are both non-binary."

"Regarding gender identity, Noella came out before either of us. She was born with a fierce and confident sense of identity."

"It first started at two-and-a-half nearing three. Someone would say to her that she was a cute boy, and she would snap back and exclaim, 'I'm not a boy, I'm a girl!'"

Yet this story of our times has sparked widespread concern. One campaigner described it as "abhorrent" and proposed Noella's mother was actively pushing her to become trans.

Noella' socially transitioned' at four and the family changed her legal birth certificate from "boy" to "girl" when she was six.

She hit the headlines in America last week when she became the youngest transgender model to walk the runway at a fashion show in New York.

She is being bombarded with modeling offers and will walk the catwalk at Paris fashion week this year.

A Hollywood agent announced, "Noella is a phenomenon. She's only ten but represents so much of where the world is now. We are seeing more trans­gender models and she's the ultimate in terms of being a woke role model."

"She is so confident for someone so young. She can make a million to two million dollars next year."

Yet it emerged that Noella's biological father has been airbrushed out of the media profiles published in the US last week.

Timothy McCord, a Chicago-based scientist, was so against her transition that he supposedly attempted to force the child into boys' pajamas and fractured her arm.

He was visiting when he and Dee were separated.

According to legal papers, McCord pleaded guilty to a child endangerment charge.

Last week, he announced he had not seen Noella or his son Levi since, continuing: "I tried to get back into their lives but it was too contentious and stressful for everyone."

Dee, who has been married to Ray – a 32-year-old biological female who has further identified as transgender since 2019 – now has a baby who is being raised as non-binary.