Must See: National Guard Locks Border Gate, But CBP Officers Open It Up To Allow A Hoard Of Migrants In 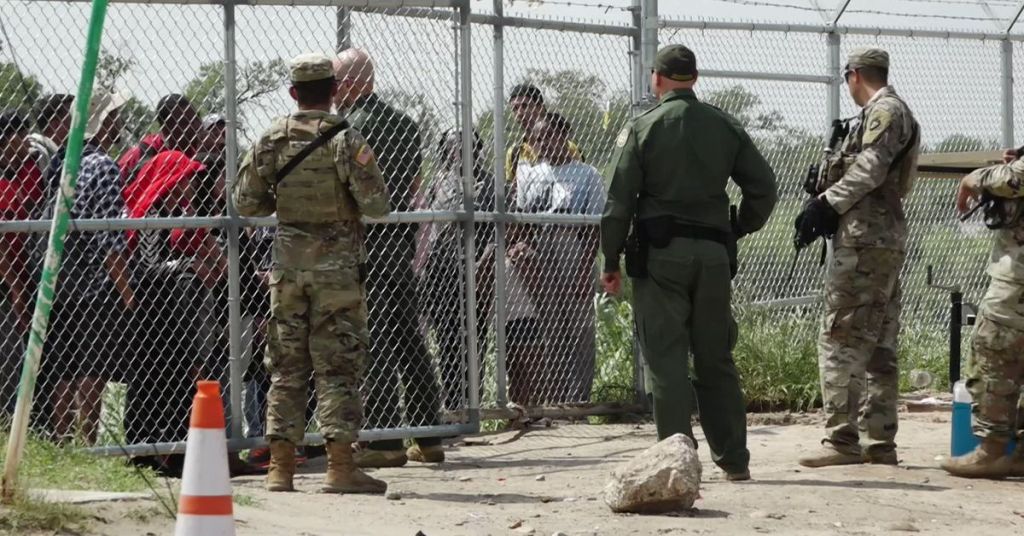 This is the moment Border Patrol opened the gates at the southern border to let illegal migrants in - only after Texas National Guard officers locked it.

Footage revealed the armed agents - who work under the direction of the Biden administration - unbuckle the barb-wire fence before streams of asylum seekers - including men, women and children - walked through.

They then stood around talking and eventually shut the barrier between Mexico and the US after dozens had filed past them into the nation.

The video was roundly denounced online, with Texas Governor Greg Abbott leading the charge by branding it "unbelievable" and blaming Joe Biden's border policies for the influx.

It comes amid a surging crisis in the US as migrants from across South America ditch their homes and trek thousands of miles in search of a better life in the States.

No less than two million are reported to have entered the nation this year, setting a new national record dating back 22 years.

In the meantime, Abbott has been sending busloads of them up to New York to try to ease the pressure in Texas, causing Big Apple Mayor Eric Adams to offload them into luxury hotels across the city.

The latest footage was caught using drones by Fox News's border reporting team. They announced it was the first time they had seen such a scenario. It further underscores the differing approach by the state and federal teams.

Bill Melugin, Fox's correspondent on the border, tweeted it was the first time he had seen the National Guard locking the gate and standing guard. He stated: "Border Patrol opening gates etc to allow migrants in is not new."

"They have to process migrants on U.S. soil per federal law. What's new is TX is now closing the gate & denying entry at this major crossing location. Always open in months past, including this video I shot in May."

Abbott deployed the Texas National Guard in March 2021, terming the mission Operation Lone Star. Since then the operation has ramped up to see 10,000 troops deployed along the border.

On Wednesday, he announced he was outraged by the CBP's actions. "Unbelievable," he tweeted. "While Texas secures the border, the federal government enables illegal immigration."

"Biden's open border policies caused this crisis. The federal government must do its job & fix it."

Abbott is know for taking headline-grabbing measures to deal with the situation on the border, amid record-breaking arrivals, and his own re-election campaign ahead of the November election.

He launched this spring a policy of sending migrants from Texas to Washington DC on buses, if they chose, in an attempt to take the matter directly to the capital.