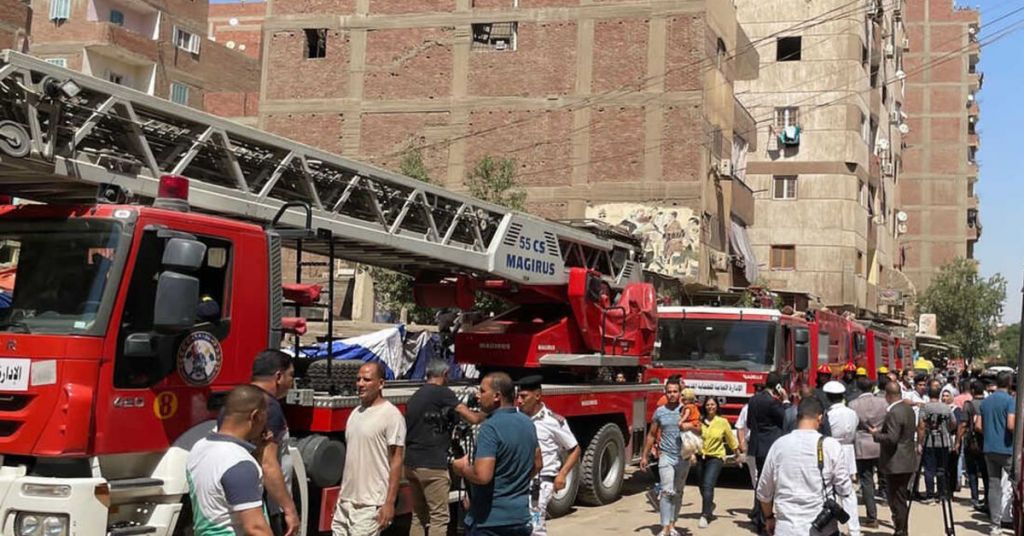 At least 41 worshipers, including a priest and at least 18 children, were killed in a fire that spread through a packed Coptic Orthodox church in Egypt's capital during its Sunday service.

Around 16 others were wounded, including four police officers involved in the rescue effort at the Martyr Abu Sefein church in Cairo's highly inhabited Imbaba area, The Associated Press reported.

The fire was prompted by an electrical failure in an air conditioning unit on the church's second floor, Egypt's Interior Ministry said. The ministry said it got calls about the fire around 9 a.m.

Online footage of the incident showed scorched furniture, including wooden tables and

After the fire, families cried outside the church and nearby hospitals where the victims had been transferred, even as firefighters were extinguishing the fire.

"Suffocation, suffocation, all of them dead," a witness was quoted as saying by AP.

"Everyone was carrying kids out of the building," Ahmed Reda Baioumy, who lives next to the church, told AFP. "But the fire was getting bigger and you could only go in once or you would asphyxiate."

Another witness said that "some threw themselves out of windows to escape the fire."

The number of children who passed away was at least 18 as young as 3.

The fire was accidental, Coptic Church spokesperson Archpriest Moussa Ibrahim said. A priest, identified as Father Abdel-Messih Bekhit, was among those killed.

The public prosecutor's office stated that asphyxiation caused the deaths because there were "no visible injuries."

Mina Masry, an area resident, told AFP that emergency responders were slow to arrive. She claims ambulances took "over an hour to arrive" and fire trucks "nearly an hour, though their station is five minutes away."

"If the ambulances had come on time, they could have rescued people," Masry claims.

President Abdel Fattah Al-Sisi wrote on Facebook that he followed the developments of the church fire closely.

"[A]ll the institutions of the concerned state have directed to take all necessary measures, and immediately to deal with this accident and its effects and to provide all aspects of healthcare to the injured," he wrote. "My sincere condolences to the families of the innocent victims who moved to their Lord's neighbor in a house from his homes where he is worshipped."

According to AFP, hundreds gathered around two Giza churches on Sunday evening to offer their respects.

The Copts form about 10% of Egypt's population and are an oppressed minority.

The Copts are the descendants of a long line of ancient Egyptians who later converted to Christianity in the early first century, according to Encyclopedia Britannica.

According to the persecution watchdog group Open Doors USA, Egypt is among the 20 worst persecutors of Christians in the world.

Incidents of Christian persecution in Egypt vary from Christian women being oppressed while traversing the street to Christian communities being pulled out of their homes by extremist mobs, the group states on its website. Christians are typically handled as second-class citizens.

Egypt's government speaks positively about the Egyptian Christian community. Still, the lack of serious law enforcement and the reluctance of local authorities to defend Christians leave them vulnerable to all kinds of attacks, especially in Upper Egypt.

"Due to the dictatorial nature of the regime, neither church leaders nor other Christians are in a position to speak out against these practices," an Open Doors factsheet notes.

Churches and Christian nongovernmental organizations are limited in their ability to build new churches or run social services. "The difficulties come both from state restrictions, as well as from communal hostility and mob violence," Open Doors USA states.