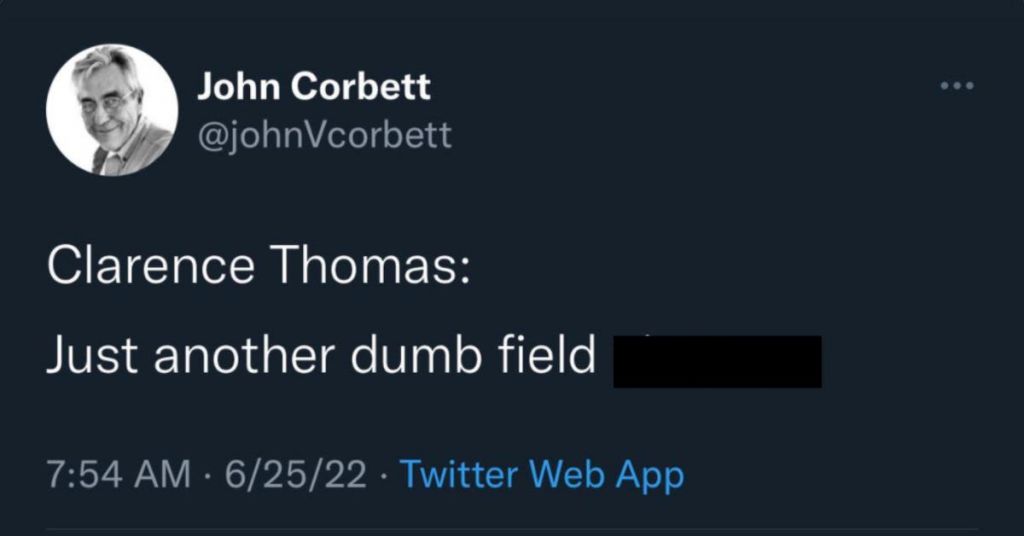 Proving that censorship and bias against conservatives are real, Twitter allowed a vulgar and insulting tweet about a black Supreme Court Justice to rotate for hours before suspending the account for one day. Meanwhile, any account that called Rachel Levine, the HHS Under Secretary who is transgender a man, has been banned for life.

Adam B. Coleman, author and The Post Millennial contributor, posted a screenshot of the hateful and racist comment on Twitter and wrote, "He says n*gger with such ease. These are the self righteous people who see black people as either an acceptable n*gger or a "field n*gger"... Either way, we'll always be n*ggers to @johnVcorbett because our purpose is to serve a master."

John Corbett, who is not My Big Fat Greek Wedding American actor John Corbett, calls himself on his website a "Pollster, Actor, and Sailor."

Corbett's last meaningful contribution to politics was in 2021 when he wrote many forecasts for the forthcoming election in the Toronto Star. Some of his forecasts were, "There is no longer a Conservative majority of seats in Canada. That dream died with the last Progressive Conservative." and "The Conservatives no longer have a path to victory in this election."

After the June 24 ruling from the Supreme Court that overturned Roe V Wade an overwhelming number of white progressives have taken to Twitter to post racial invectives regarding Thomas. Coleman has been retweeting and posting screenshots of many, especially before they're flagged or taken down, and identifies their writers as "woke, white supremacists."

The progressive hate for Justice Thomas arises from their view that an African-American man cannot be a Conservative and that his opinions cause him to be a betrayer to his race. Progressivism completely embraces intersectional concepts of racial essentialism and defines the world completely by immutable characteristics as they relate to the perception of privilege and hierarchies of power.

Thomas' consistent rejection of that ideology invites waves of hate from the Left. Authors like Shelby Steele and Thomas Sowell have explained how progressive ideology provides simultaneous relief from guilt for white elites while reaffirming a sense of infantilization towards minorities that puts them at the top of a food chain.

Clarence Thomas' work and words serve as a monolithic rebuttal to that elixir of belief, one that pulls them, as so well illuminated by John Corbett, down to the most vile of racial insults.

President and CEO of Mainstreet Research replied on Twitter, stating that Corbett had not worked for the company since 2021.