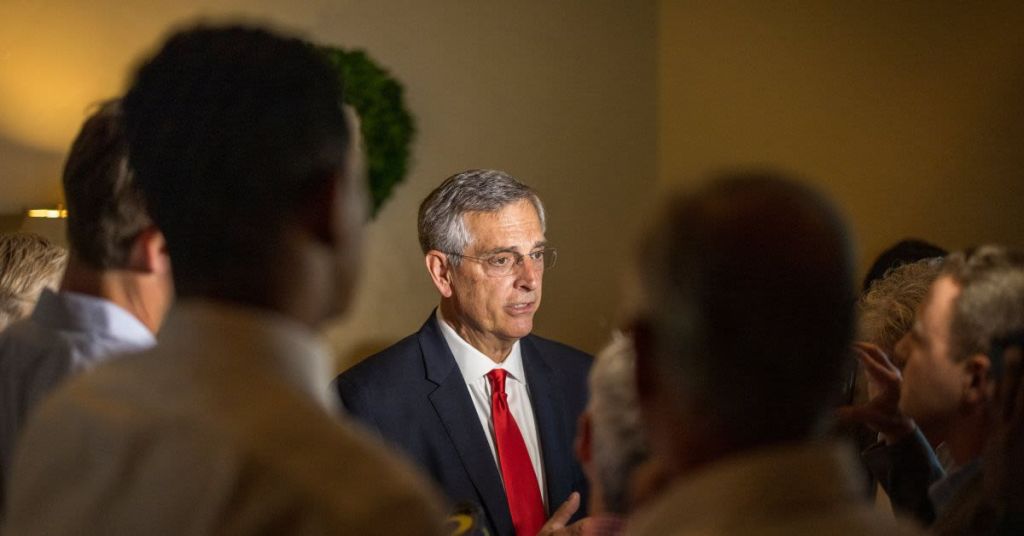 Georgia Secretary of State Brad Raffensperger and his top deputy, Gabriel Sterling, told the House Select Committee probing the Jan. 6 Capitol riot on Tuesday that former President Donald Trump’s claims about the 2020 election being taken from him are baseless and supported their state’s election process in 2020 as accurate.

Raffensperger, a Republican running for re-election who recently overcame a Trump-endorsed primary challenger for the GOP nomination, told the Committee that President Joe Biden won Georgia by about 12,000 votes, which was confirmed in recounts.

Telling the Committee that before the election, he wanted to see Trump reelected, Raffensperger said Trump "came up short" on Election Day in Georgia.

Raffensperger, as the state’s top elections official, backed Georgia’s election process as Trump and his supporters pushed unsupported claims that the election was stolen from the former President.

Sterling told the Committee that he decided to address Trump directly at a December 2020 press conference after death threats were made against a Dominion Voting Systems staffer amid Trump’s fraud claims.

"That's what prompted me to do what I did,” Sterling said. “I lost my temper, but it seemed necessary at the time because it was just getting worse."

The Committee played recordings of a Jan. 2, 2021, phone call between Trump and Raffensperger in which Trump made claims of fraud without evidence.

In a transcript and recording of that call that was later published, Trump tried to pressure Raffensperger to “find” enough votes to overturn the state’s election in his favor rather than Biden's.

The Committee also played a clip of Trump insisting that Raffensperger find additional votes because “we won the state,” a claim Raffensperger said was wrong.

“We didn’t have any votes to find,” Raffensperger said.

Sterling said that in the time since the elections, he has argued with Georgians, even family members, about Trump’s claims, which he said some continue to believe even after being presented with evidence to the contrary.

"The problem you have is you're getting into people's hearts,” he said, adding, “Once you get past the heart, the facts don't matter that much." Raffensperger has previously described the call as an attempt to intimidate him into changing the results, which he said he would not do. He told the Committee that he has been doxxed and threatened, as have his family members, including a break-in at his widowed daughter-in-law’s home.

“We followed the law and we followed the Constitution,” Raffensperger said. “At the end of the day, President Trump came up short.”

In an attempt to revenge Raffensperger, Trump endorsed a primary challenger to the secretary of state, Rep. Jody Hice, who was unsuccessful in his bid to unseat Raffensperger. A comparable bid by former Sen. David Purdue to unseat Gov. Brian Kemp, who also resisted Trump’s pressure to overturn the election results, also was unsuccessful.