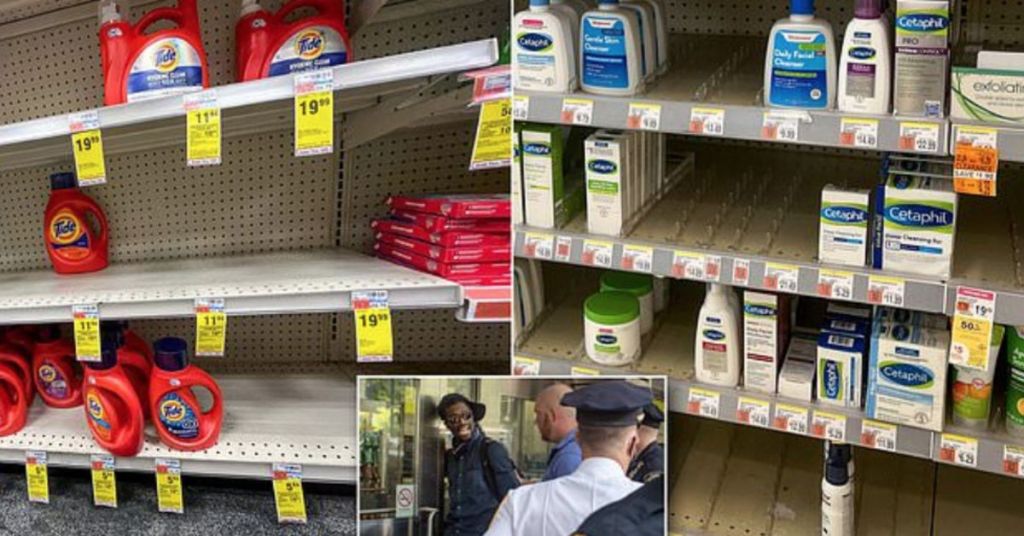 Shelves in pharmacies across New York City have been left nearly barren as supplies are not able to get through.

Stores such as CVS, Walgreens and Duane Reade are all running very low on products and goods.

Supplies are being held up on cargo ships that are taking up to four weeks to dock at US ports.

A lack of manpower to unload and then drive goods across the US is causing a giant backlog.

Experts have warned the government must intervene or face spiraling inflation and unemployment.

The backlog of billions of dollars of clothing, toys, vehicles, electronics, hardware and furniture comes as the demand for consumer goods hit its highest point in history as consumers stay home instead of spending money on travel and entertainment.

Supply chains have lagged far behind consumer demand due to a lack of manpower at American ports and the restrictions that came with the COVID-19 outbreak. These constraints, which include social distancing and mandatory quarantines, have severely limited the number and ability of port workers to do their jobs.

'Global infrastructure was not designed to handle goods at such a rate,' a logistics expert, who asked not to be named, told DailyMail.com.

'Supply chains are the artery who feeds our entire ecosystem. The government needs to intervene to stop this crisis immediately, or face increased inflation and unemployment, and economic breakdown - or face an end to global trade.'

With a rap sheet 74 offenses long, dating back to 2015, according to police sources, the King of Queens Thieves has been arrested 57 times this year alone, including in a vicious stabbing, police sources told The Post.

On Sept. 8, an 11-year-old boy was slashed by a pair of shoplifters while defending his family’s Avenue D Mini Mart in Manhattan from thieves, police said.

A week later, police arrested Hector Diaz, 50, a neighborhood resident with at least 18 prior arrests for crimes ranging from drug possession to petit larceny.

“We absolutely have seen an increase in shoplifts gone bad,” LiPetri said, adding the number of such incidents in 2021 has spiked 18 percent from last year.

“Organized shoplifting has been around for a long time, but certainly not at the level we’re witnessing in New York and elsewhere,” said Joseph Giacalone, an adjunct professor at John Jay College of Criminal Justice and a former NYPD sergeant. “The penalty if caught is low, but the reward is high. The Internet provides an easy way to fence items.

“This isn’t about bread like AOC [Congresswoman Alexandria Ocasio-Cortez] will have you believe. It’s about opportunists taking advantage of decisions made in their favor thanks to the Mayor, City Council and Albany. It only gets worse from here.”