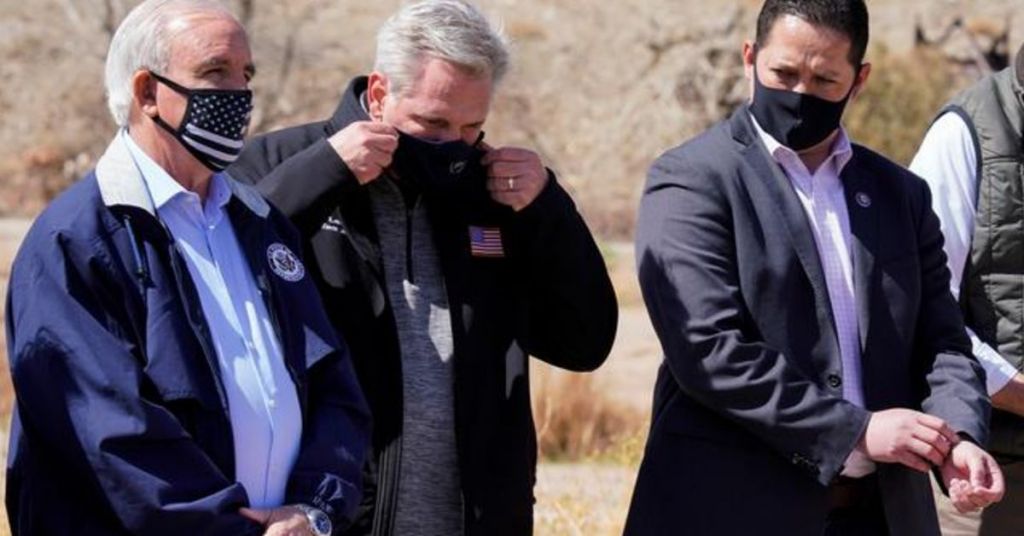 House Minority Leader Kevin McCarthy (R-Calif.) told reporters at a press briefing from the southern border on Monday that doctors at the U.S.-Mexico border in Texas told him that 10 percent of illegal aliens are testing positive for the CCP virus before being delivered into adjacent communities.

“When I talk to the doctor to see when they’re being tested for COVID, when they get out, more than 10 percent are testing positive,” said McCarthy. “Well, you’re being stored together. In a time when the president will keep our country closed, when maybe we have hope for a fourth of July, to get together just with our family, how much spread of COVID is he creating every single day by his policies along this border?”

Trey Mendez, mayor of Brownsville, Texas, told reporters in a Zoom call on Monday that 7.3 percent of illegal aliens arriving in his city have tested positive for COVID-19, the disease the CCP (Chinese Communist Party) virus causes.

“This is where [Biden] should talk to the border agents, and let them know that this is beyond a crisis,” McCarthy said. “He can continue to deny it, but the only way to solve it is to first admit what he has done, and if he will not reverse action, it’s going to take congressional action to do it.”

The California congressman said he sent a letter to President Joe Biden for purposes of meeting with him to review the crisis at the southern border, and particularly about the directions his administration is sending migrants.

Opponents of Biden’s relaxed immigration policies say they are feeding the flood of migrants at the border. In February, illegal passages rose above 100,000, according to official data, with another 26,000 bypassing acquisition, according to provisional Customs and Border Protection numbers analyzed by former Texas Department of Public Safety captain Jaeson Jones.

The Biden administration recently admitted, even though unwillingly, that there is a disaster at the border.

When pressed by journalists about why illegal aliens are not required to have negative test results to enter the country like all others who enter legally, White House press secretary Jen Psaki maintained the administration’s policies and said more could be done with testing and quarantine of them if the governor of Texas would allow it.

“Border security is strictly a federal responsibility. The federal government alone has the responsibility to test, screen, and quarantine illegal immigrants crossing our border who may have COVID,” Abbott, a Republican, said in a statement. “Instead of doing their job, the Biden administration suggested it did not have the sufficient resources and, remarkably, asked Texas to assist them in aiding their illegal immigration program. Texas refused.”