Friday's revelations came from more than 2,000 documents that were unsealed by the U.S. Attorney’s Office for the Southern District of New York. The papers included affidavits and depositions of key witnesses in a lawsuit the now-33-year-old woman, Virginia Roberts Giuffre, filed against Epstein and his associate, Ghislane Maxwell in 2015. Giuffre accused the duo of keeping her as a “sex slave” in the early 2000s when she was underage.

DESANTIS LETS THE WORLD KNOW FLORIDA IS OPEN FOR BUSINESS

DESANTIS LETS THE WORLD KNOW FLORIDA IS OPEN FOR BUSINESS

In another deposition, Giuffre also reveals that she was “trafficked” to Mitchell, a former Senate Majority leader who represented Maine from 1980-95 and was later named special envoy to the Middle East by President Obama. A sworn affidavit by a former Epstein employee, Juan Alessi, also alleges Mitchell, 85, of having associated with Epstein.

“The allegation contained in the released documents is false,” Mitchell said in a statement to Fox News. “I have never met, spoken with or had any contact with Ms. Giuffre.”

He added: “In my contacts with Mr. Epstein I never observed or suspected any inappropriate conduct with underage girls. I only learned of his actions when they were reported in the media related to his prosecution in Florida. We have had no further contact.”

WOMEN QUITTING JOBS IN THE MASSES-CONSERVATISM OR LAZINESS?

WOMEN QUITTING JOBS IN THE MASSES-CONSERVATISM OR LAZINESS?

A spokesperson for Richardson denied the allegations, telling Fox News in a statement Friday that they are “completely false.”

Giuffre also has long-claimed that Epstein forced her to have sex with Harvard Law Professor Alan Dershowitz. In the newly-revealed documents, Giuffre, who was at the time labeled as “Jane Doe #3,” claimed that Epstein required her to have sexual relations with Dershowitz on numerous occasions while she was a minor. Giuffre claimed to have had the encounters in Florida, on private planes, in New York, New Mexico, and in the U.S. Virgin Islands.

Dershowitz has vehemently denied the allegations.

Meanwhile, included in the hundreds of pages of documents were pages of flight logs from Epstein’s private jet. Prominent individuals who had traveled on the jet, according to those records, included Bill Gates, who flew once, former President Bill Clinton and aide Doug Band, who flew four times, President Trump, who flew once in 1997 from Palm Beach to New York, Colombian President Andres Pastrana, Dershowitz, Hyatt Hotels Chairman Tom Pritzker, Brunel, and model and talent agent Naomi Campbell, among others.

Epstein pleaded not guilty to sex trafficking and sex trafficking conspiracy last month in New York. Epstein, 66, is accused of having preyed on dozens of victims as young as 14.

Epstein allegedly created and maintained a “vast network” and operation from 2002 “up to and including” at least 2005 that enabled him to “sexually exploit and abuse dozens of underage girls” in addition to paying victims to recruit other underage girls. Prosecutors said that victims would be escorted to a room with a massage table where they would perform massages on Epstein.

“The victims, who were as young as 14 years of age, were told by Epstein or other individuals to partially or fully undress before beginning the ‘massage’,” prosecutors wrote. “During the encounter, Epstein would escalate the nature and scope of physical contact with his victims to include, among other things, sex acts such as groping and direct and indirect contact with the victim’s genitals.”

Victims would be paid hundreds of dollars in cash by either Epstein or one of his associates or employees.

Prosecutors also allege that Epstein “worked and conspired with others, including employees and associates” who helped facilitate his conduct by contacting victims and scheduling their sexual encounters with Epstein at his mansion in New York City and in Palm Beach, Fla.

Giuffre claims that Maxwell was one of those associates. Giuffre has accused Maxwell as being Epstein’s madam who allegedly approached her in 1999 when she was just 15. Maxwell, 57, is the daughter of Robert Maxwell, a disgraced publishing mogul who was accused of theft from his company’s pension funds to prevent bankruptcy. Maxwell was born and raised in England and immigrated to America in 1991, and became a fixture in the New York social scene. Maxwell has been photographed over the years at events with Prince Andrew, the Clintons and Trump. Maxwell dated Epstein for a short period of time before becoming close friends.

Epstein’s arrest came amid renewed scrutiny of a once-secret plea deal that ended a federal investigation against him.

That deal, which has been challenged in Florida federal court, allowed Epstein, 66, to plead guilty to lesser state charges of soliciting and procuring a person under age 18 for prostitution.

The plea deal was brokered with the help of then-U.S. attorney in Florida Alexander Acosta. The deal was criticized as lenient because Epstein could have faced a life sentence.

Last month, Acosta, who served as secretary of Labor for Trump, resigned from his post amid renewed scrutiny over the deal.

New documents released by the US Court of Appeals for the Second Circuit reveal that Jeffrey Epstein accuser Virginia Roberts Giuffre said Donald Trump “didn’t partake in any sex” with Epstein’s girls.

Responding to a 2011 article that claimed Trump was a “good friend of Jeffrey’s,” Giuffre clarified, “It’s true that he didn’t partake in any sex with us,” while she also insisted that Trump didn’t even flirt with the girls. 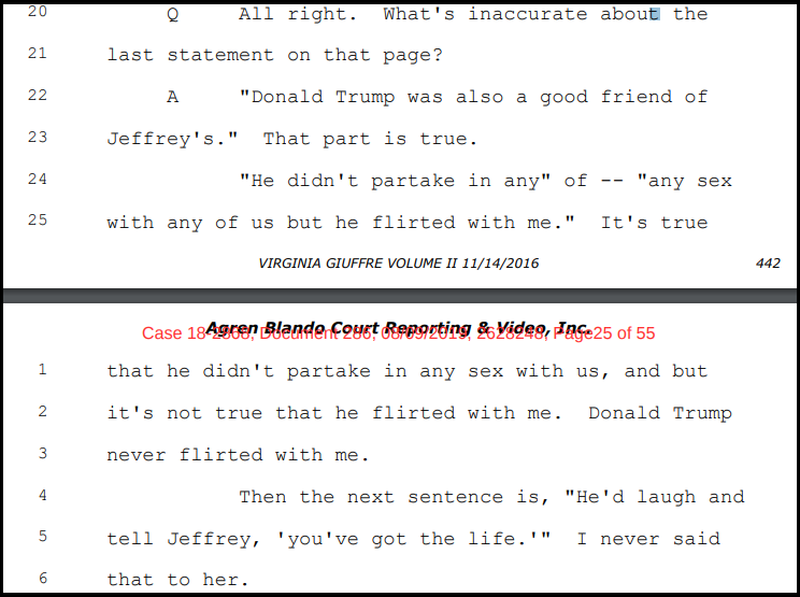 As we previously highlighted, despite the media hyping a strong connection between Trump and Epstein, the indictment against the accused sex trafficker contained absolutely no information about Trump.

The lawyer for one of the victims of Jeffrey Epstein also said President Trump was the “only” high powered person to help him with his investigation, contradicting claims by some that Trump is implicated in Epstein’s crimes.

Despite this, some anti-Trump media outlets continue to assert a strong connection between the two because Trump once said Epstein prefers his women “on the younger side.”

Once Epstein’s behavior became known, Trump distanced himself from the disgraced billionaire, something that can’t be said for a certain Bill Clinton.

© 2021 DEMY Media, LLC
The New Trump Idea For The Border Crisis Involves A Lot Of GUNS 2 hours 54 minutes ago

Start your own discussion or comment on someone else's
Chappelle Is Hysterical, But Netflix Just Caved To The Woke Mob (Video) 7 hours 39 minutes ago

Start your own discussion or comment on someone else's
New Criminal Defense: 'Our Hatred For Trump Made Us Sell Nuclear Secrets' 5 hours 39 minutes ago

Start your own discussion or comment on someone else's
Watch: Psaki Confirms The Secret Smuggling Project yesterday

Start your own discussion or comment on someone else's
Must See: Russia Makes Announcement That Can Lead To WW3 10 hours 9 minutes ago

Start your own discussion or comment on someone else's
Republicans Fighting Back Against Mail-In-Voting, Filibuster Expected 7 hours 39 minutes ago

Start your own discussion or comment on someone else's
Watch: Former Secretary Of State SLAMS Critical Race 2 hours 54 minutes ago