The armed man who was killed after trying to firebomb an ICE facility in Washington state wrote an Antifa manifesto explaining his motives.

Willem Van Spronsen, who was carrying a rifle, was shot dead after he threw Molotov cocktails at the building and nearby cars on Saturday morning.

“He was throwing these items at the building in an effort to set it on fire. It didn’t work, it’s a concrete building,”said Officer Loretta Cool with the Tacoma Police Department.

According to his friend Deb Bartley, Van Spronsen was a member of Antifa and his attack on the facility was intended to provoke a fatal conflict.

The Seattle Times reports that Van Spronsen also wrote a “manifesto” which Bartley refused to discuss but said would be confiscated by authorities. 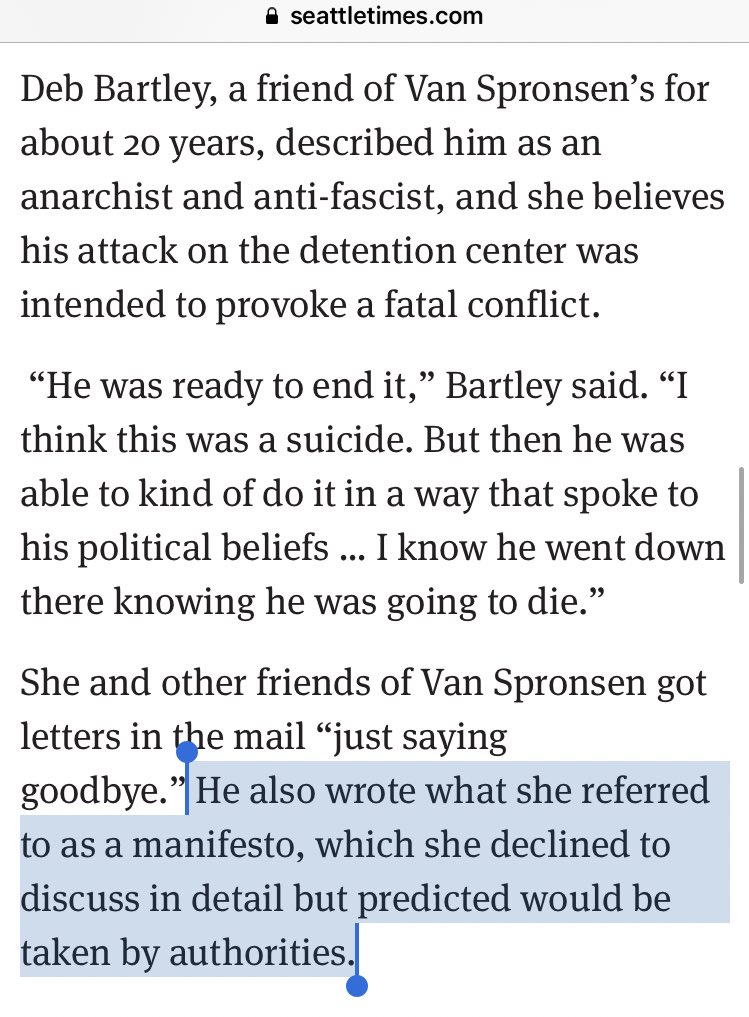 Jack Posobiec responded by offering a thousand dollars for a copy of the manifesto.

I will offer $1,000 for a verified copy of Willem Van Spronsen’s Antifa manifesto that was reportedly mailed to several associates before he fire bombed the ICE facility in Tacoma today

“I will offer $1,000 for a verified copy of Willem Van Spronsen’s Antifa manifesto that was reportedly mailed to several associates before he fire bombed the ICE facility in Tacoma today,” tweeted Posobiec.

Rercords show that Van Spronsen was previously arrested for assaulting a police officer.

Unbelievably, some left-wing activists blamed ICE for the deadly confrontation despite the fact that it was initiated by Van Spronsen.

What did they think would happen if they recklessly compared the border crisis to concentration camps?

Did @AOC@Vox & @shaunking think no one would take them seriously & get violent? pic.twitter.com/oASqxXdHkw

The Democratic Governor of Washington State believes there is one person to blame for an incident in which a far-left activist tried to firebomb an ICE facility; President Trump.

Governor Jay Inslee was responding to the attack, during which 69-year-old Willem Van Spronsen, who was armed with a rifle, was shot dead after throwing Molotov cocktails at the building and nearby cars.

Van Spronsen was an Antifa activist and reportedly wrote a manifesto explaining the motives behind the attack.

However, according to presidential candidate Inslee, President Trump is to blame.

This statement from @GovInslee is just crazy. He sounds more concerned for illegal immigrants than American ICE agents & police who risked their life. No apology for daily rhetoric from his party that demonizes ICE officials. He basically excuses the attack as driven by anxiety. pic.twitter.com/uL6oLj98pj

He also tried to deliberately mislead people about the nature of the attack by claiming it is unknown whether Van Spronsen was targeting detainees or staff, when it was established almost immediately that the incident was an anti-ICE attack.

“We don’t know the motivation,” Inslee told CNN Saturday. “I’m going to keep an open mind about this as the investigation proceeds and I hope that calm can be the order of the day.”

Inslee again suggested that Trump was to blame for the attack for creating “anxiety” in the community.

That explanation is certainly more accurate than blaming President Trump, which is patently absurd.

Man tries to set immigration jail on fire, dies after shootout with police

The shooting took place about six hours after a peaceful rally in front of the detention center, police spokesman Loretta Cool said.

Police said Van Spronsen caused a vehicle to catch fire and that he attempted to ignite a large propane tank and set buildings on fire. Police said that besides the rifle, he had a satchel and flares.

Police said officers called out to Van Spronsen, and shots were fired.

Cool said all four officers fired their weapons, but she didn’t have specific details of what took place. She said the officers weren’t wearing body cameras, but the area is covered by surveillance cameras from the detention center. She said she didn’t know if the man fired at the officers.

After the gunfire, officers took cover, contained the area and set up medical aid a short distance away, police said.

Officers then located Van Spronsen and determined he had been shot and was dead at the scene.

Authorities say investigators are processing the scene and police are continuing to investigate. No law enforcement officers were injured. The four Tacoma police officers who fired their weapons have been placed on paid administrative leave as is standard in officer-involved shootings.

A friend of Van Spronsen said that she thinks he wanted to provoke a fatal conflict, the Seattle Times reported.

Deb Bartley, who told the Times she has been a friend of Willem Van Spronsen’s for about 20 years, described him as an anarchist and anti-fascist, and believes his attack on the detention center intending to provoke a fatal conflict.

“He was ready to end it,” Bartley said. “I think this was a suicide. But then he was able to kind of do it in a way that spoke to his political beliefs . I know he went down there knowing he was going to die.”

She said that she and other friends of Van Spronsen got letters in the mail “just saying goodbye.” He also wrote what she referred to as a manifesto, which she declined to discuss in detail, the Times reported.

Van Spronsen was accused of assaulting a police officer during a protest outside the detention center in 2018, The News-Tribune reported. According to court documents, he lunged at the officer and wrapped his arms around the officer’s neck and shoulders, as the officer was trying to detain a 17-year-old protester June 26, 2018, the newspaper reported.

According to court documents, police handcuffed Van Spronsen and found that he had a collapsible baton and a folding knife in his pocket. Van Spronsen pleaded guilty to the charge of obstructing police, and was given a deferred sentence in October, the News-Tribune reported.

GEO Group, which runs the 1,575-bed Northwest Detention Center, in an email to The Associated Press said baseless accusations about how detainees are treated at its facilities “have led to misplaced aggression and a dangerous environment for our employees, whose safety is our top priority. Violence of any kind against our employees and property will not be tolerated. We are thankful for the quick and brave action by the Tacoma Police Department, which prevented innocent lives from being endangered.”

GEO Group said the detention center in Tacoma has modern amenities with air conditioning, recreational activities, a bed for every individual and medical care available at all hours.

Last year, a federal judge ruled that Washington state could pursue its lawsuit seeking to force GEO Group to pay minimum wage for work done by detainees at the detention center.

In November, a Russian asylum-seeker who conducted a hunger strike to protest the conditions at the detention center died by suicide, the Pierce County Medical Examiner’s Office ruled.

Mergensana Amar, 40, was taken off life support after attempting to kill himself while in voluntary protective custody at the detention center on Nov. 15, U.S. Immigration and Customs Enforcement said.

Start your own discussion or comment on someone else's
Horrifying Video: Pro-Terrorists Company Launch A Bloody Game 14 hours 50 minutes ago

Start your own discussion or comment on someone else's
Hysterical - Must See: Tucker Rips On Buttigieg For Paternity Leave 12 hours 20 minutes ago

Start your own discussion or comment on someone else's
'Clap' For Bill? Is Former President Clinton 'Feeling The Burn' (Of An STD)? 12 hours 20 minutes ago

Start your own discussion or comment on someone else's
USSA: Teachers Now Getting Punished For Questioning Critical Race Theory 8 hours 35 minutes ago

Start your own discussion or comment on someone else's
This Is How Jen Psaki Violated The Hatch Act: 3 hours 50 minutes ago

Start your own discussion or comment on someone else's
Hypocrisy: Senator Biden Would Have Been Opposed To President Biden's Plan 10 hours 20 minutes ago

Start your own discussion or comment on someone else's
Watch: ISIS-K Takes over Afghanistan As Taliban Struggles 7 hours 35 minutes ago