The left-wing activist group that spearheaded the political rise of Alexandria Ocasio-Cortez is now working to take down several incumbent Democrats who have defied the party's freshman progressive wing, leaving some of House Speaker Nancy Pelosi's loyalists on Capitol Hill anxiously wondering if they might soon fall in the crosshairs themselves.

Justice Democrats, which was co-founded by Ocasio-Cortez chief of staff Saikat Chakrabarti, has already announced it is looking to unseat seven-term pro-life Texas Democratic Rep. Henry Cuellar, who represents a conservative district and has boasted about his endorsement from the National Rifle Association. Also on the list: New York Rep. Eliot Engel, the House Foreign Affairs Committee chairman who's currently in his 16th term.

Cuellar and Engel each have primary challengers, and all indications are that the campaigns will be contentious. While Ocasio-Cortez has stopped short of issuing endorsements in the races, Chakrabarti tweeted a link to a website accepting donations for Cuellar's challenger in June, adding caustically, "Cuellar votes with Trump more than some Republicans ... [and] votes most with big oil, private prison corps, and the gun lobby."

From the leadership to the rank-and-file, many House Democrats don't see much daylight between themselves and Justice Democrats' two current targets -- and that has them worried. 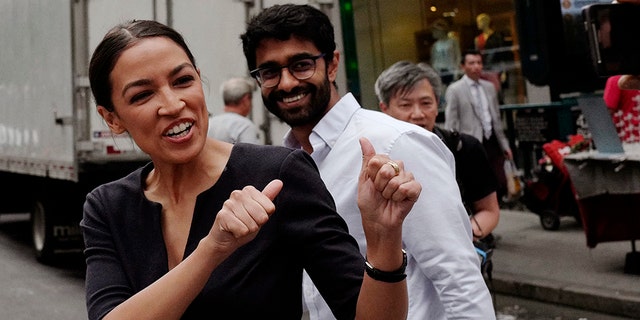 Added Virginia Democratic Rep. Don Beyer, who serves as finance co-chair for the Democratic Congressional Campaign Committee: "It's not just older white men, but everybody including younger incumbent women is looking over their left shoulder."

Engel, who is Jewish, was among the House Democrats who criticized freshman Rep. Ilhan Omar after controversial remarks suggesting Israel supporters were loyal to a foreign country. Engel said back in March, “it's unacceptable and deeply offensive to call into question the loyalty of fellow American citizens.”

Both Engel and Cuellar also joined virtually all of their colleagues last month in supporting House Democratic leaders' failed $4.5 billion proposal to fund border facilities, which was opposed by only four Democratic members of Congress, all in their first terms: Reps. Ocasio-Cortez, Omar, Ayanna Pressley, and Rashida Tlaib.

A separate $4.6 billion proposal, with less robust protections for migrants, later passed, again over the fierce objections of the freshman contingent. Engel opposed that measure, while Cuellar voted for it.

In a testy interview Sunday with ABC News' Martha Raddatz, Tlaib stood by her "no" vote on each proposal, saying the system was "broken" and claiming that during a visit to a border detention facility, "three agents took me aside, away from my colleagues and said, more money is not going to fix this, that they were not trained to separate children, that they don't want to separate two-year-olds away from their mothers."

That interview came amid a public spat between Ocasio-Cortez and Pelosi, that began when Pelosi told the New York Times last week that “all these people have their public whatever and their Twitter world,” referring to the House Democrats who voted against the border aid bill. On Monday, Ocasio-Cortez fired back, listing a series of dismissive comments Pelosi had made about Ocasio-Cortez's political acumen and policy proposals.

That kind of zeal in the face of mainstream and establishment scrutiny has become the hallmark of the new left-wing freshman class in the House. Yet progressive organizations worry that, emboldened by Ocasio-Cortez and others, a glut of Democratic challengers might divide the anti-incumbent vote in some districts, helping House members they are targeting survive party primaries. In 40 states, the primary winner needs only the largest share of votes, and there is no runoff.

"On both counts, the extremes of the party are causing problems for the party in terms of maintaining seats," David McLennan, a political science professor at Meredith College in North Carolina, said last month.

Democrats in particular appeared to be experiencing the brunt of the new insurgent tidal wave. There are approximately 260 declared House Democratic challengers through May this year. Of those, 103, or 40 percent, were in districts with sitting Democrats, not GOP-held or open seats.

By contrast, there were just 212 declared GOP House challengers. Only 37, or 17 percent, would oppose Republican incumbents.

In all, Justice Democrats has said it intends to recruit fewer than the dozen House challengers it enlisted and mentored in 2018. Ocasio-Cortez was their only winner. They also endorsed 66 other House, Senate and state candidates, of whom six won.

"We used to think it was quantity," said Alexandra Rojas, executive director of Justice Democrats, which has around 10 staffers and reported spending just $2.5 million in 2018. But because of Ocasio-Cortez's impact, pressuring even Democratic presidential candidates to address issues like climate change and universal health care, Rojas says she now believes "it's more about one big race can really transform everything and shift the political landscape."

It's premature to gauge whether the enthusiasm progressives say they're observing will translate to serious primary candidacies. The overwhelming majority of challengers fail due to funding, organizational and name-recognition shortcomings.

Still, party leaders note that just four of the House's 435 members were defeated in primaries last year, two from each party, with most lawmakers facing no primaries because they seemed unbeatable. Only three times since 1974 have the number of incumbents losing primaries reached double digits.

Activists say they will concentrate their efforts on safely Democratic seats. Top Democrats argue that still endangers their House majority by forcing incumbents to spend money defending themselves in primaries, siphoning funds that could have helped the party elsewhere.

Bustos and others say because much of the committee's budget comes from dues paid by House Democrats, it shouldn't work with firms that try unseating those same incumbents.

That's not stopping progressives from preparing to challenge incumbent Democrats they consider too conservative. Those most mentioned include Rep. Dan Lipinski, D-Ill., as well as Reps. Stephen Lynch and Richard Neal, chair of the House Ways and Means Committee.

Fox News' Andrew O'Reilly and The Associated Press contributed to this report.

“I’m not sure. … The details might not have all matched, but that’s what I remember”

Rep. Ilhan Omar (D-MN) told students at a high school in Minneapolis a tragic story of an African-American woman sentenced to jail time for stealing a loaf of bread to feed her starving granddaughter.

Now she is admitting she may have fabricated some details.

Rep. Ilhan Omar confessed to falsifying a story she shared in front of about 400 students at Richfield High School in Minneapolis.

The anecdote was from Omar’s days of working for a Minneapolis city councilman five years ago.

She described a “sweet, old … African American lady” who got arrested for stealing a $2 loaf of bread to feed her starving 5-year-old granddaughter and spent the weekend in jail.

After the congresswoman’s speech, for which she was 30 minutes late and cost the students their lunch period, the Washington Post investigated the claim.

“I’m not sure. … The details might not have all matched, but that’s what I remember,” the Minnesota Democrat said in an interview. “She might have had a prior [arrest].”

Even the Washington Post story, which is mostly a glowing profile, threw a skeptical eye on her account:

Omar’s story echoed the plot of “Les Miserables.” If true, it is also probably embellished. City officials said that police aren’t allowed to arrest people for shoplifting unless there’s a likelihood of violence or further crime. Typically, shoplifters are sentenced to attend a three-hour class.

Twitchy has collected some responses to the Free Beacon report on this:

Ilhan Omar could so quickly tell an amazing pro-American story based on her experience of coming here as a refugee and eventually winning a seat in Congress. Instead, she seems hostile to America, despite ev

© 2021 DEMY Media, LLC
SHOCKING- Kinzinger Will Be Run Out Of Office But Not By GOP's 1 hour 25 minutes ago

Start your own discussion or comment on someone else's
Hysterical - Must See: Tucker Rips On Buttigieg For Paternity Leave 12 hours 10 minutes ago

Start your own discussion or comment on someone else's
'Clap' For Bill? Is Former President Clinton 'Feeling The Burn' (Of An STD)? 12 hours 10 minutes ago

Start your own discussion or comment on someone else's
USSA: Teachers Now Getting Punished For Questioning Critical Race Theory 8 hours 25 minutes ago

Start your own discussion or comment on someone else's
This Is How Jen Psaki Violated The Hatch Act: 3 hours 40 minutes ago

Start your own discussion or comment on someone else's
Hypocrisy: Senator Biden Would Have Been Opposed To President Biden's Plan 10 hours 10 minutes ago

Start your own discussion or comment on someone else's
Watch: ISIS-K Takes over Afghanistan As Taliban Struggles 7 hours 25 minutes ago