Four ISIS terrorists were arrested in Nicaragua on their way to the United States. The Egyptians were named as Mohamed Ibrahim, 33, and Mahmoud Samy Eissa, 26, while the Iraqis were Ahmed Ghanim Mohamed Al Jubury, 41 and Mustafa Ali Mohamed Yaoob, 29.

According to La Prensa — The Nicaraguan Army arrested four alleged terrorists of the Islamic State (IS). Three of them correspond to the subjects that Costa Rica reported being in Nicaragua, after passing through the Costa Rican immigration controls.

The ISIS terrorists entered illegally from Costa Rica, through the unmarked border crossing, known as La Guasimada, in the municipality of Cárdenas, department of Rivas.

Four men with suspected ties to the Islamic State militant group were captured on Tuesday by members of the Nicaraguan armed forces after entering the country illegally from Costa Rica, Nicaraguan police said.

The identities of three of the men matched those of suspects featured in an alert attributed to U.S. Homeland Security Investigations (HSI) warning that three possible terrorists had recently arrived in Central America.

In a statement, Nicaraguan police said two of the men were Egyptian nationals and the other two were Iraqi. The four were due to be deported back to Costa Rica, it added.

The Egyptians were named as Mohamed Ibrahim, 33, and Mahmoud Samy Eissa, 26, while the Iraqis were Ahmed Ghanim Mohamed Al Jubury, 41 and Mustafa Ali Mohamed Yaoob, 29.

The first three men were named in the HSI alert published by Mexican media on Monday, which identified them as possible members of Islamic State headed for the United States.

Mainstream media and congressional Democrats alike were in lockstep just months ago that the situation along the southern border was a “manufactured crisis” being ginned up by the president for political reasons -- but the narrative has swiftly shifted as those same voices now acknowledge the crisis while citing the conditions to attack the Trump administration.

It's a striking contrast between then and now.

After Trump in January declared a “humanitarian and security crisis" during a primetime Oval Office address, Sen. Chuck Schumer, speaking beside House Speaker Nancy Pelosi, said Trump was working to “manufacture a crisis, stoke fear and divert attention from the turmoil in his administration." Party leader Tom Perez also called it “manufactured.”

Democrats, many of whom downplayed the Central American caravans back in 2018, renewed their skepticism again after Trump declared a national emergency in February in pursuit of a border wall. Rep. Alexandria Ocasio-Cortez, D-N.Y., described it as a "'crisis' that doesn't exist." Sen. Elizabeth Warren tweeted at the time that "we're not falling" for the "fake crisis."

CNN’s Jim Acosta famously stood along the Mexican border only six month ago, patting the steel slats and declaring that he didn’t see anything resembling “imminent danger” or migrants trying to enter the United States.

“No sign of the national emergency that the president has been talking about… pretty tranquil down here,” Acosta said. 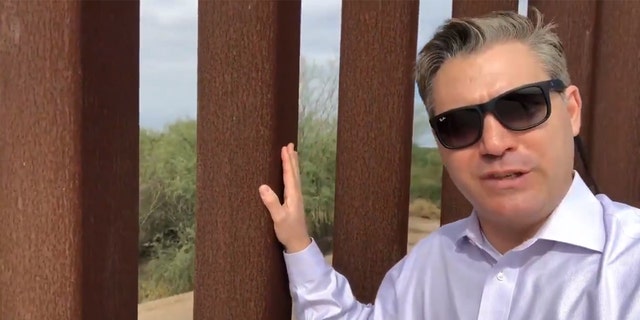 CNN’s Kirsten Powers told Anderson Cooper last December that “the entire thing is something that's been manufactured to basically gin up support for a wall” when asked about the situation along the border. New York Times politics editor Patrick Healy said on CNN back in April 2018 that a “manufactured crisis” was occurring at the border.

Now, Ocasio-Cortez and others are comparing the situation to concentration camps.

While that comparison has been criticized, the evidence of overwhelming migrant flows and poor conditions at some detention centers has become undeniable for both sides of the aisle.

A heart-stopping and tragic photo of a father and daughter who died while attempting to cross the Rio Grande on Sunday underscored the disastrous situation. CNN covered it with a chyron, “Shocking image illustrates crisis at American’s Southern border,” and the Times published the photo on its front page. 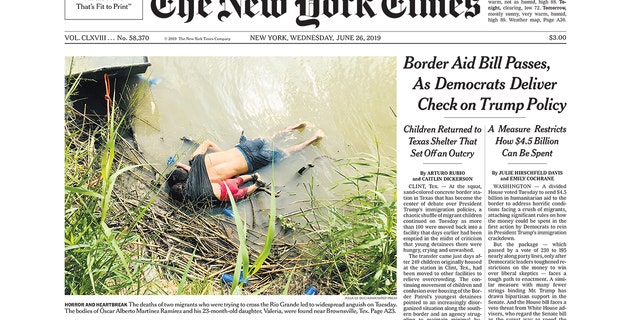 Stories of neglect and mistreatment at a Border Patrol facility in Clint, Texas -- including inadequate food and water and children taking care of toddlers -- have also gained attention, coming as acting Customs and Border Protection Commissioner John Sandersstepped down this week amid controversy over the conditions.

Pelosi, on the House floor Tuesday, decried the situation as "child abuse" and called it a "crisis" while accusing the administration of failing to provide adequate care to children in custody.

Media Research Center vice president Dan Gainor told Fox News that “the media strategy has shifted” as anti-Trump pundits and Democratic officials are now concerned with the number of people crossing the border.

“The press can't deny it anymore, even though they did just a few months ago,” Gainor said, adding they would use the tragic photo to blame Trump. “They won’t explain that its Democrats pushing open borders who have escalated this crisis by encouraging more people to enter the U.S.”

On April 8, 2018 CNN’s Brian Stelter opened his “Reliable Sources” show by hammering the point of the crisis being artificial while criticizing the decision to send in the National Guard.

“Hey, a manufactured crisis at the border,” Stelter said, according to a CNN transcript. “A story that symbolizes everything that's wrong with the Trump era. President Trump receives faulty information, then he makes impulsive decisions and his staff has to scramble. Ask yourself: why is there so much talk about the U.S.-Mexico border all of a sudden? Why are National Guard troops suddenly being deployed?”

Stelter went on to answer his own questions: “Trump wants a PR victory… as a result, we're all talking about the border. A manufactured crisis.”

Stelter has since changed his mind, and opened his media newsletter on Tuesday by noting “the humanitarian crisis at the border is back at the top of the national news agenda.” Media watchdogs took to Twitter, pointing out Stelter’s pivot and responding with an image of a chyron beneath the CNN media pundit that said, “A manufactured crisis on the border.”

CNN did not respond when asked when the crisis stopped being considered manufactured.

DePauw University journalism professor and media critic Jeffrey McCall told Fox News that “the border is complex and doesn't lend itself to simple narratives that reporters often seek” and “the inability of the media to cover the matter in a nuanced and less politically charged manner is unhelpful to the nation” as a whole.

“Sadly, the situation at the border has become more of a rhetorical struggle than about really trying to fix the problem. Trump has no doubt has tried to define the matter in ways that are politically advantageous and that included using the word ‘crisis.’ Many reporters were unwilling to concede the use of that term and legitimize Trump’s assertion,” McCall said. “As conditions have deteriorated, however, the media narrative seeks to define the Trump administration as unresponsive to the humanitarian issues.”

Elizabeth Warren Calls For Decriminalization Of Illegal Immigration At Border

This article was sourced from Political Insider

“We should not be criminalizing mamas and babies trying to flee violence at home or trying to build a better future,” Warren told the HuffPo.

“We must pass comprehensive immigration reform that is in line with our values, creates a pathway to citizenship for undocumented immigrants including our DREAMers, and protects our borders.”

Castro attracted attention in April when he began advocating for basically doing away with any border laws whatsoever. “This was an idea championed by immigration activists and experts for some time,” Castro spokesperson Sawyer Hackett tweeted, “but not adopted by mainstream political leaders until Julian Castro‘s People First Immigration platform.”

This was an idea championed by immigration activists and experts for some time but not adopted by mainstream political leaders until @JulianCastro’s People First Immigration platform. https://t.co/ETajqwvYC9

Castro added his own voice, thanking Warren, “Thank you, @ewarren, for joining me on this issue. We shouldn’t criminalize desperation—it’s time to repeal this terrible law.”

Thank you, @ewarren, for joining me on this issue. We shouldn’t criminalize desperation—it’s time to repeal this terrible law. https://t.co/669Q456Yfz

“Every candidate will call for ending family separation,” Hackett said. “This is the only way to guarantee it.”

Leave it to Democrats to always take every idea to the extreme.

Most Americans Agree With Trump

There are many Americans who agree with President Donald Trump that we need to stop illegal immigration and build the wall. There are many others who might not agree with the president about the wall or all of his policies, but most still believe the country needs enforceable borders.

You will find few, if any, that believe we should essentially have no borders at all.

But this is exactly what Warren and before her, Castro, are advocating for. A country in which anyone can just walk across the border without any repercussions whatsoever really isn’t a country at all.

And these are the people who Democrats want to be the next President of the United States?

Start your own discussion or comment on someone else's
Hysterical - Must See: Tucker Rips On Buttigieg For Paternity Leave 10 hours 31 minutes ago

Start your own discussion or comment on someone else's
'Clap' For Bill? Is Former President Clinton 'Feeling The Burn' (Of An STD)? 10 hours 31 minutes ago

Start your own discussion or comment on someone else's
This Is How Jen Psaki Violated The Hatch Act: 2 hours 1 minute ago

Start your own discussion or comment on someone else's
USSA: Teachers Now Getting Punished For Questioning Critical Race Theory 6 hours 46 minutes ago

Start your own discussion or comment on someone else's
Hypocrisy: Senator Biden Would Have Been Opposed To President Biden's Plan 8 hours 31 minutes ago