Former FBI director James Comey is on the record, claiming that he was told by then-Attorney General Loretta Lynch to classify the Hillary email investigation as a “matter” rather than an “investigation.” A newly released transcript of Loretta Lynch’s testimony contradicts that account.

Former Attorney General Loretta Lynch denied to congressional investigators last year that she ever instructed former FBI Director James Comey to minimize the Hillary Clinton email investigation by urging him to call it a “matter” instead of an “investigation.”

“I did not. I have never instructed a witness as to what to say specifically. Never have, never will,” Lynch told a joint task force of the House Oversight and Judiciary committees.

He told the Senate Intelligence Committee in 2017 that Lynch “directed” him to call the investigation a “matter” during a September 2015 meeting. Comey brought it up in the context of describing his decision to do a press conference in the summer of 2016 in which he recommended no criminal charges against Clinton but called her handling of classified information “extremely careless.”

Here’s a short video of Rep. Collins announcing the release of the transcripts:

It didn’t take long for people to spot the discrepancy:

When Lynch was asked about this in April of 2018, she didn’t deny it, but of course, Lester Holt didn’t press her on it. Real Clear Politics reported:

Loretta Lynch on Requesting Comey To Call Clinton Probe A ‘Matter’: “Concerns Were Not Raised”

Holt grilled Lynch on the directive Comey claimed that he received, how she reacted and what really happened. According to Lynch, it was a meeting like any other and “concerns were not raised” by Comey.

“Comey says you wanted to call it the ‘Clinton matter,’ he wants to call it the Clinton investigation. To the extent though that he noted it, that it bothered him, did he go to you and question your credibility with regard to the Clinton case?” Holt asked the former AG.

“I can tell you though that it was a meeting like any other that we had, where we talked about the issues,” Lynch answered. We had a full and open discussion about it.”

“He didn’t raise any concerns about it?” Holt asked.

“Concerns were not raised,” she said.

See the video below:

In June of 2017, while offering testimony on this, James Comey made it perfectly clear that Lynch told him to refer to the investigation as a “matter.” Watch:

Who is going to win this dispute over what really happened?

Former Attorney General Loretta Lynch has flatly accused former FBI Director James Comey of mischaracterizing her remarks by claiming that Lynch told him to call the Hillary Clinton email probe a "matter" instead of an "investigation" -- in the latest public dispute to break out among high-level ex-Obama administration officials.

Lynch made the remarks before the House Oversight Committee last December. A transcript of her testimony was released on Monday by House Judiciary Committee ranking member Doug Collins, R-Ga.

In a June 17 interview with the House Intelligence Committee, Comey said Lynch had pressed him to downplay the significance of the Clinton email review. He said the moment led him to question her independence and contributed to his decision to hold a press conference in July 2016 announcing the conclusions of the probe.

“The attorney general had directed me not to call it an investigation, but instead to call it a matter, which confused me and concerned me," Comey testified. “That was one of the bricks in the load that led me to conclude, ‘I have to step away from the department if we’re to close this case credibly.’”

Comey continued: “The Clinton campaign, at the time, was using all kind of euphemisms — security review, matters, things like that, for what was going on,” Mr. Comey said on Thursday. “We were getting to a place where the attorney general and I were both going to have to testify and talk publicly about. And I wanted to know, was she going to authorize us to confirm we had an investigation? ... And she said, ‘Yes, but don’t call it that, call it a matter.' And I said, ‘Why would I do that?’ And she said, ‘Just call it a matter.’”

Comey later said that Lynch's secret airport tarmac meeting with Bill Clinton in the summer of 2016 cemented his assessment that Lynch lacked independence.

But in her remarks in December, Lynch flatly said Comey had mischaracterized the situation. 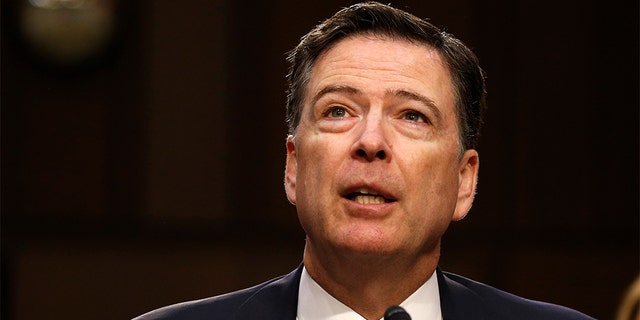 "I did not," Lynch responded when asked if she had ever told Comey to call the investigation a "matter."

"I have never instructed a witness as to what to say specifically. Never have, never will," Lynch continued. "In the meeting that I had with the Director, we were discussing how best to keep Congress informed of progress and discuss requesting resources for the Department overall. We were going to testify separately. And the concern that both of us had in the meeting that I was having with him in September of 2015 was how to have that discussion without stepping across the Department policy of confirming or denying an investigation, separate policy from testifying.

"Obviously, we wanted to testify fully, fulsomely, and provide the information that was needed, but we were not at that point, in September of 2015, ready to confirm that there was an investigation into the email matter -- or deny it," Lynch added. "We were sticking with policy, and that was my position on that. I didn't direct anyone to use specific phraseology. When the Director asked me how to best to handle that, I said: What I have been saying is we have received a referral and we are working on the matter, working on the issue, or we have all the resources we need to handle the matter, handle the issue. So that was the suggestion that I made to him."

Pressed for her reaction to Comey's statements, Lynch said they had come as a shock.

"Excuse me. Ms. Lynch, so in the meeting with the FBI Director you referred to the Clinton investigation as a matter -- I just want to make sure I understand -- but you did not instruct the Director when he testified in front of Congress to call it a matter. Is that accurate?" Jordan asked.

"I said that I had been referring to -- I had been using the phraseology," Lynch responded. "We've received a referral. Because we received a public referral, which we were confirming. And that is Department policy, that when we receive a public referral from any agency, that we confirm the referral but we neither confirm nor deny the investigation. That's actually a standard DOJ policy.

Last week, a high-level dispute over which senior government officials pushed the unverified Steele dossier amid efforts to surveil the Trump campaign has broken out into the open, after it emerged that Attorney General William Barr appointed a U.S. attorney to examine the origins of the Russia investigation and determine if the FBI and DOJ's actions were "lawful and appropriate."

On Monday Rep. Doug Collins released the remaining transcripts from the House Judiciary Committee’s investigation into decisions made at the DOJ and FBI to exonerate Hillary Clinton and spy on candidate Donald Trump.

According to the transcripts Loretta Lynch denied telling FBI Director James Comey to refer to the Clinton email case as a “matter,” rather than an investigation. This directly contradicts statements made by James Comey under oath. Someone is lying!

Loretta Lynch DENIES telling Comey to refer to the Clinton email case as a "matter," rather than an investigation, directly contradicting statements made by Comey. SOMEONE IS LYING. pic.twitter.com/qb0U4Jopp3

Start your own discussion or comment on someone else's
Hypocrisy: Senator Biden Would Have Been Opposed To President Biden's Plan 9 hours 36 minutes ago

Start your own discussion or comment on someone else's
USSA: Teachers Now Getting Punished For Questioning Critical Race Theory 7 hours 51 minutes ago

Start your own discussion or comment on someone else's
Watch: ISIS-K Takes over Afghanistan As Taliban Struggles 6 hours 51 minutes ago

Start your own discussion or comment on someone else's
This Is How Jen Psaki Violated The Hatch Act: 3 hours 6 minutes ago

Start your own discussion or comment on someone else's
Hysterical - Must See: Tucker Rips On Buttigieg For Paternity Leave 11 hours 36 minutes ago

Start your own discussion or comment on someone else's
'Clap' For Bill? Is Former President Clinton 'Feeling The Burn' (Of An STD)? 11 hours 36 minutes ago